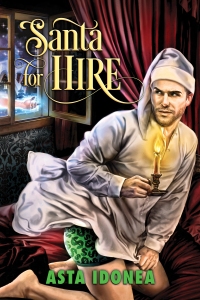 Dumped by his ex on Christmas Eve two years ago, Oxford Street department store manager Richard Barrett now hates the holidays. Things go from bad to worse when the store’s usual Santa is too ill to reprise his role and the firm sends cocky but handsome Blaine Ryder to take his place. The attraction between the two is clear, but Blaine is an incorrigible player who reminds Richard of his ex. His idea of a relationship is a quick roll in the hay, and his advances have Richard running for the hills. It might take some special intervention for both of them to realize they can change enough to have a chance at a holiday romance.

The awful moment had arrived. Not long ago he’d felt there was plenty of time in which to prepare, to steel himself for the agony ahead, but somehow the dreaded hour had snuck up on him. What had one day seemed far off was already here the next.

Richard Barratt took a deep breath. He tugged at his collar and straightened his tie. He brushed off the already spotless arms of his suit jacket and glanced down at the perfectly tied laces on his leather shoes. Then, unable to put it off a moment longer, he pushed open the swing door and emerged onto the salesroom floor.

Overnight, while he failed to get a wink of sleep, crews had been hard at work. The Homeware department of Langley & Giles’s Oxford Street branch had been transformed from the pristine section he managed like a well-oiled machine to a hideous winter wonderland. Christmas had been infiltrating the store for weeks. The cards had started appearing downstairs in Stationery as early as September. Wrapping paper and labels had followed in October, along with Christmas puddings in the high-class Food Hall on the lower ground floor. And now the rest, signaling six weeks of Christmas-cheer hell.

Richard couldn’t understand why it had to be his section that bore the brunt of the deluge. Surely Toys and Games would make more sense. Christmas was all about children’s presents, after all. But upper management had been firm. Toys and Games required more space at Christmas, not less, and Homeware had the best layout to accommodate the monstrosity that formed the centerpiece of their annual Yuletide displays: Santa’s Grotto.

Asta Idonea (aka Nicki J Markus) was born in England but now lives in Adelaide, South Australia. She has loved both reading and writing from a young age and is also a keen linguist, having studied several foreign languages.

Asta launched her writing career in 2011 and divides her efforts not only between MM and mainstream works but also between traditional and indie publishing. Her works span the genres, from paranormal to historical and from contemporary to fantasy. It just depends what story and which characters spring into her mind!

As a day job, Asta works as a freelance editor and proofreader, and in her spare time she enjoys music, theatre, cinema, photography, and sketching. She also loves history, folklore and mythology, pen-palling, and travel, all of which have provided plenty of inspiration for her writing.