The award-winning Taking Shield series comes to an explosive conclusion in the fifth book, Day of Wrath, to be published on 28 June 2018.

First that cover. Designed by Adrian Nicholas, who’s been responsible for creating the Taking Shield brand, this cover features a faceless drone, one of the cyborg soldiers sent against humanity by the Maess: 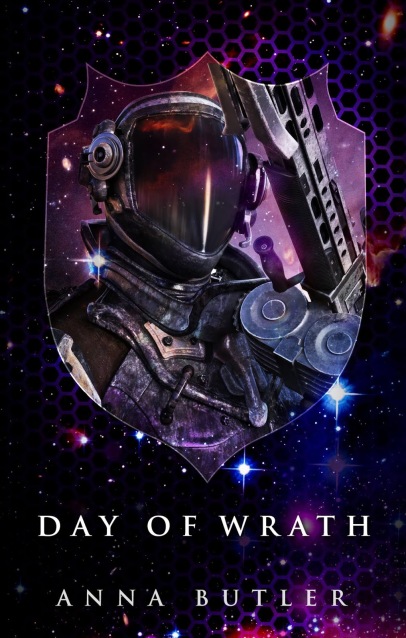 About Day of Wrath

In less than a week, Bennet will finally return to the Shield Regiment, leaving behind the Gyrfalcon, his father, his friends… and Flynn. Promotion to Shield Major and being given command of a battle group despite the political fallout from Makepeace the year before is everything he thought he wanted. Everything he’s worked towards for the last three years. Except for leaving Flynn. He really doesn’t want to leave Flynn.

There’s time for one last flight together. A routine mission. Nothing too taxing, just savouring every moment with the best wingman, the best friend, he’s ever had. That’s the plan.

Bennet should know better than to trust to routine because what waits for them out there will change their lives forever.

Want to win some loot? Pre-order The Day of Wrath at a digital store (Amazon, Kobo, Nook etc) and send a copy of the email confirmation (or a screengrab of it) to annabutlerfiction@gmail.com and

(ii) the first twenty to respond will get a little bag of Taking Shield loot; and

(ii) your name will be entered in a draw to win one of seven signed first edition paperbacks of Taking Shield 02: Heart Scarab. Winners will be announced on publication day.

Excerpt from Day of Wrath

As Bennet angled over to starboard, Flynn gave his own Hornet a metaphorical boot in the backside, and tagged along faithfully at Bennet’s port wing. He stayed close and tight. Pity the ensigns weren’t there to see how it was done. With finesse. Panache. And sheer, mind-boggling talent.

The Hornet’s navigational computer helpfully overlaid a representation of Aglaia with the usual spherical latitude-longitude grid, pulling the planetary data from the database. At least they had the figures for known planets logged and stored and the nav-com didn’t have to make it up. Which it could, of course, by designating the poles with an arbitrary north and south label, locating the equator, and inventing an arbitrary prime meridian to work with. According to legend, the system originated on Earth before man took to the skies, so old it was invented for sailing ships. Given Earth was ten thousand years gone, Flynn put a lot of emphasis on ‘legend’. Their flight navigation systems were built on bloody folklore.

Still, at least he couldn’t get lost.

He followed Bennet into a high orbit along Aglaia’s equator, skimming along for a moment before going down into the atmosphere. And by skimming, he meant they bounced along like stones skipping over water before they burst through into a storm system. A big storm system. The air roiled in great waves and billows, buffeting the Hornets, and lightning cracked and sizzled off their hulls. The flow of the clouds was fierce, the turbulence greatest at the boundaries between cloud layers. And the winds! More than fierce. They were a howling, raging, relentless savagery that threatened to overwhelm even the Hornet’s engines. The Hornet bucked and balked against the winds, and it took every ounce of skill Flynn possessed to fight her into obedience, to keep her flying in the direction he wanted. He couldn’t rely on relaxed experience here. This was active, constant readjustment to make her respond. He dropped back a trifle, giving Bennet and himself room to ride out the bucking and bouncing. He wasn’t so much flying through Aglaia’s skies, as cavorting through them.

Gods, it was fun!

Anna : what you, dear reader, might expect from the Taking Shield series

Now then, if I’m reading a romance, I have certain expectations. I want to see two people attracted to each other, overcoming some obstacle to being together, being faithful and loving. And at the very least, the book must close with a Happy-For-Now ending even if the story can’t quite make it Happy Ever After. En route they can have all sorts of things happen: murders, mystery, mayhem. Doesn’t matter. What matters is they’re together and I can put the book down feeling good about the outcome.

But this is where things get a little sticky. Because if you’re looking for pure romance, then I have to confess that the Taking Shield series won’t deliver it. Shield isn’t romance. It is a love story—a very deep and, at times, intense love story—that covers five or six years of interstellar war and billions of miles of space travel. This is a classic space opera. All the staples of old school sci-fi are here: big spaceships, infiltrations of enemy bases, cool Shield suits, and lots of people running around shooting their lasers.

And it has two men in love. Oh wait. Not as old school as all that, then.

Across the whole of the series, there are two main story themes, intertwining with each other: the war against the Maess and, set against that, the relationship between Shield Captain Bennet and Fleet Lieutenant Flynn. The Maess war and everything Bennet has to do there gets equal billing with the slow unfolding of his relationship with Flynn.

So something of a niche appeal, here! But if you like sweeping sagas and big love stories where the obstacles the heroes face are big and sweeping too, I do hope you’ll give Bennet and Flynn a try. They aren’t perfect, but a couple of guys with all their warts and faults, all their brilliance and intelligence, all their courage and loyalty and great hearts, all their beauty and all their ugliness—and they love each other. They love each other a great deal, despite every parting, and every reverse and upset in their relationship. And now, at the end of the series, perhaps they’ll get their chance.

Do come on the adventure with them. I don’t think you’ll regret it.

Taking Shield started out as a simple set of ‘what if’ questions. What if, in some AU universe, Earth’s been a burnt out dustball for the last ten thousand years? What if there’s a riff on the Exodus and remnants of humanity escape, but led by Pharaohs? What if the new world they found, Albion, is at war with an enemy no one has ever seen? What if the hero is a member of Albion’s special forces and the Military Strategy Unit? What if he finds something that seriously threatens Albion? What if he falls in love with a Fleet pilot and has his life turned upside down?

Earth’s a dead planet, dark for more than ten thousand years; lost for so long no one even knows where its solar system is. Her last known colony, Albion, has grown to be regional galactic power in its own right. But Albion’s drive to expand and found colonies of its own has threatened an alien race, the Maess, against whom Albion is now fighting a last-ditch battle for survival in a war that’s dragged on for generations.

The Taking Shield series charts the missions and adventures of Shield Captain Bennet, scion of a prominent military family. Over the Taking Shield arc, Bennet will see the extremes to which humanity’s enemies, and his own people, will go to win the war. Some days he isn’t able to tell friend from foe. Some days he doubts everything, including himself, as he strives to ensure Albion’s victory. And some days he isn’t sure, any longer, what victory looks like.

Note: the novels are not standalones and should be read in order.

Taking Shield 01: Gyrfalcon — Earth’s last known colony, Albion, is fighting an alien enemy. In the first of the Taking Shield series, Shield Captain Bennet is dropped behind the lines to steal priceless intelligence. A dangerous job, and Bennet doesn’t need the distractions of changing relationships with his long-term partner, Joss, or with his father—or with Flynn, the new lover who will turn his world upside-down. He expects to risk his life. He expects the data will alter the course of the war. What he doesn’t expect is that it will change his life or that Flynn will be impossible to forget.

Available FREE at Payhip | A digital bookstore near you

Taking Shield 02: Heart Scarab — Shield Captain Bennet is on Telnos, an unpleasant little planet inhabited by religious fanatics and unregistered miners running illegal solactinium mines. It’s about to be about to be overrun by the Maess. Bennet’s job is to get out as many civilians as he can, but the enemy arrives before the evacuation is complete. Caught in a vicious fire fight, Bennet is left behind, presumed dead.

His family is grieving. Joss, his long-term partner, grieves with them; lost, unhappy, remorseful. First Lieutenant Flynn has no official ‘rights’ here. He isn’t family. He isn’t partner or lover. He’s just broken

Available at Payhip | A digital bookstore near you

Taking Shield 03: Makepeace — Returning to duty following his long recovery from the injuries he sustained during the events recounted in Heart Scarab, Shield Captain Bennet accepts a tour of duty in Fleet as flight captain on a dreadnought. The one saving grace is that it isn’t his father’s ship—bad enough that he can’t yet return to the Shield Regiment, at least he doesn’t have the added stress of commanding former lover, Fleet Lieutenant Flynn and knowing the fraternisation regulations will keep them apart.

Bennet’s new mission takes him behind the lines to Makepeace, once a human colony but under Maess control for more than a century. The mission goes belly up, costing Albion one of her precious, irreplaceable dreadnoughts and bringing political upheaval, acrimony and the threat of public unrest in its wake. But for Bennet, the real nightmare is discovering what the Maess have in store for humanity. It’s not good. It’s not good at all.

Available at Payhip | A digital bookstore near you

Taking Shield 04: The Chains Of Their Sins — Shield Captain Bennet arrives on the Gyrfalcon to take up his final year’s posting before returning to the Shield Regiment.

On the Gyrfalcon he faces up to the fallout from Makepeace—ethical, political and above all, personal. Will he be able to accept necessity: that knowing what the Maess are up to outweighs the humanitarian issues surrounding the prisoners he rescued from Makepeace? Can he ride out the political furore that follows the loss of the dreadnought Caliban? How will he cope with an entire year of serving under his father, Caeden? And worst of all, how in the name of every god in the Pantheon can he stand to see Flynn every single day, with the Fraternisation Regs standing between them and keeping them apart?

It will be an interesting year. Bennet can hardly wait for it to be over. Of course, things never really do go to plan…

Available from Payhip | A digital bookstore near you

Anna Butler was a communications specialist for many years, working in various UK government departments on everything from marketing employment schemes to organizing conferences for 10,000 civil servants to running an internal TV service. These days, though, she is writing full time. She lives with her husband in a quiet village tucked deep in the Nottinghamshire countryside. She’s supported there by the Deputy Editor, aka Molly the cockerpoo, who is assisted by the lovely Mavis, a Yorkie-Bichon cross with a bark several sizes larger than she is but no opinion whatsoever on the placement of semi-colons.