Celebrating the holiday season, I have two ebooks available for FREE download from Smashwords until 12th December

When Jonathan Winters accepts a post as tutor to the only son of Lord D’Anvers, he looks forward to sharing his love of learning with his young pupil. Not even arriving at Castle Blackstone in the middle of a thunderstorm can dampen his enthusiasm.
Absorbed with Evelyn’s education, Jonathan is completely unprepared to find himself the object of Lord D’Anvers’ attentions.
Until D’Anvers kisses him

Three Novellas:
Rough Play – Lieutenant Matthew Ferris stumbles on a scandal that could tear his spaceship Jerez apart. Some call it rough play, he calls it unacceptable.
His Guilty Secret – Heir to a wealthy shipping family, Adam S Hayes has his life carefully mapped out. Career, marriage, family. After establishing himself successfully as Captain of the Patrol Ship Revel, it is time for the next step. Everything is going according to plan … until he meets Danyel King. Troubled and confused, Hayes risks losing his chance for love as he finds himself torn between his heart and his head.
Dangerous Tension – Spaceship Captain Matthews has kept his sexuality a secret. What happens when the crew finds out? is Lieutenant Kent as straight as he always believed? Will he hit him or kiss him, or both?
Gay romantic Sci-fi 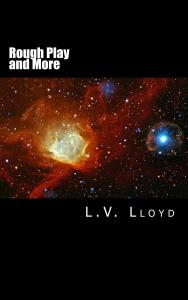